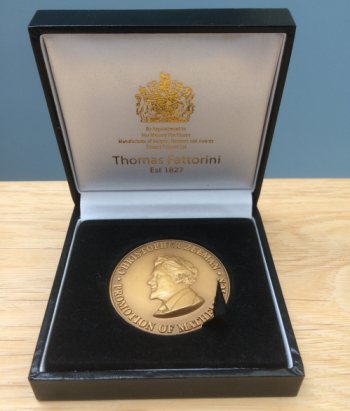 In 2016 I was thrilled and honoured to receive the Zeeman medal for excellence in the promotion of maths.  The medal is in honour of Professor Sir Christopher Zeeman, and is awarded jointly by the London Maths Society and the Institute of Maths and its Applications.

Winning a medal felt a bit odd - I was being singled out for an individaul contribution when much of the maths I've done (especially in writing books and producing Maths Inspiration shows) has been part of a team effort.  In my 'lecture' at the award ceremony, I drew an analogy with cricket, a team sport in which individuality can be celebrated. I play a lot of cricket, and I always enjoy it when I make a good score or take a few wickets, but I enjoy it a lot more when I do well in a victory in which the whole team made a contribution.

Anyway, you can read the citation here