What is a Googly?
By Rob Eastaway

Originally published by Robson Books in 1992, reprinted and revised several times, with a new fully updated edition in 2019

Described by The Times as 'The ideal gift book for cricket lovers to bestow upon the uninitiated' this book broke new ground by aiming to demystify cricket for those who had always found it impossible to understand. It explains where cricket came from, what happens on the field, what the tactics are, and the dos and don'ts of being a spectator, with each chapter headed by a question often asked by newcomers, including: 'Why do they rub the ball on their trousers?' and 'Who's winning?'.

This was my first book, and remains in many ways my favourite. The book did well from the start, helped by a fantastic review from Jonathan Agnew on BBC Test Match Special. John Major presented a copy to President George Bush Senior. In America it was published under the title of "Cricket Explained". The day after England's 2005 Ashes victory, it reached No.4 in the Amazon rankings - for one hour at least. (I know this because I spent the afternoon clicking the refresh button on my computer.)  In 2019 I did a major update to take account of the huge developments in Twenty20 and Women's cricket.  Illustrator Mark Stevens came out of retirement to do several new cartoons.  All royalties from the 2019 edition are going to www.googlyfund.co.uk, a charity that supports friendly adult cricket in the UK. 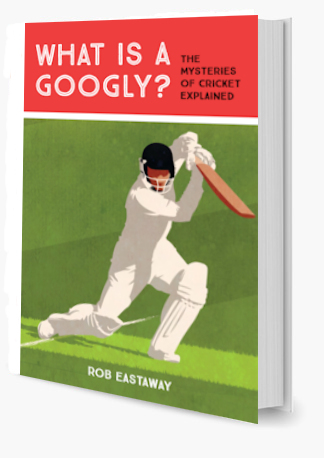