If you are the parent of a teenager, there's a question you dread more than any other. "When am I ever going to need this maths?" The fact that maths is compulsory and yet often seemingly irrelevant to the real world drives many teenagers mad. And parents often feel powerless to help. Quadratic equations, factorising, finding the locus: what do these words even mean? In this follow-up to Maths for Mums & Dads, Mike Askew and I have written this book to help parents guide their teenager through the build-up to GCSE though it isn't intended as a GCSE textbook. The book has four main parts:
Part 1 - The most common issues with teenagers and maths, and advice on how to deal with them.
Part 2 - The 'Essential Skills'. Regardless of the curriculum, what is the most important maths your teenager will need in later life?
Part 3 - The maths itself, with sections on Algebra, Geometry, Numbers, Calculation and Statistics, in that order.
Part 4 - Test questions.

We surveyed hundreds of teenagers in compiling this book, and talked in depth to many parents, too. Instead of following the curriculum in the order it is taught, we deliberately put Algebra first, since this is the area of the maths that causes parents and teenagers more angst than any other. 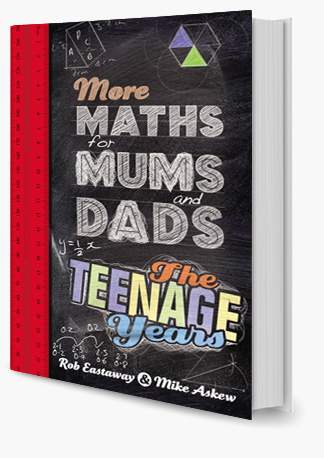