Mindbenders and Brainteasers
By David Wells and Rob Eastaway

A collection of just over 100 assorted puzzles, ranging from the short "aha" type to some that require serious paper and pencil work. Suitable for age 10 to adult. A small number of old favourites, but a lot that you won't have seen before.

This book combines the 'best of' the Guinness Mindbenders and Brainteasers books, but with refinements to the wording and about a dozen additional puzzles, including the 'Inside the Box' puzzle.

The original Guinness Mindbenders book, which I compiled with David Wells, was published in 1995. I was interviewed on (now extinct) London Talk Radio by the legendary Simon Bates. He claimed that he and his production team could only solve one puzzle in the book, and after a rather squirmy interview he handed his copy to his next guest, Scottish rock star Fish, who claimed to be a puzzle fan. 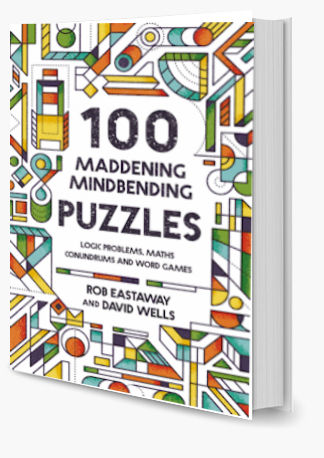