How To Remember Almost Everything, Ever
By Rob Eastaway

Published by Wizard Books in 2007

This was a new edition of what was originally called "The Memory Kit", with new illustrations, updated text, and the original kit material now combined into a single book. Although aimed at children aged 8-12, it's the kind of book that adults enjoy too. There are explanations of how memory works, experiments and techniques to test out, and - best of all - a section on mnemonics at the back.  A few you'll have heard of but plenty more that will be new to you, such as 'Hippety Hop, Little Benjamin Bunny Can Never Overtake Flopsy' (the first eight elements in the Periodic Table).

The original book was published in the USA by Element in 1999, and sold about 50,000 copies. My editor was the now legendary Barry Cunningham, who had just left Bloomsbury books after signing up J.K.Rowling. Alas this book was not destined for Harry Potter millions because just after it was published Element went bust, meaning there were no royalties and the book disappeared from shops shortly after being published in the UK.

The kit was repackaged by Wizard as a single book in 2007. It attracted far more interest - including from Simon Mayo's show on BBC 5 Live.  A brand new edition is coming out in 2015, published by Pavilion Books. 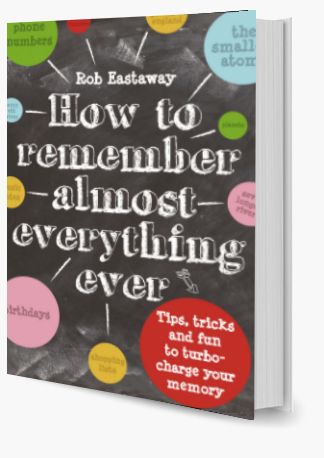