How Long is a Piece of String?
By Rob Eastaway and Jeremy Wyndham

Why do weather forecasters get it wrong? What are the best tactics for playing "Who Wants to be a Millionaire?" and "The Weakest Link"? And what is the link between a tin of baked beans and a men's urinal?

This follow-up to "Why Do Buses Come In Threes?" looks at more of the maths of everyday life. There are two chapters about music, two others about mathematical con tricks, as well as chapters on epidemics, lifts and taxis.

New Scientist said "it is rare for a book about mathematics to be as engaging as this", but that was pretty well the only review it got. Still, it's been reprinted several times, and bizarrely the lift chapter featured in two different Radio 4 series, one presented by Evan Davis and the other by Lynn Truss. Everyone seems to have a different favourite chapter. Mine is the first, about the maths of the days of the week. It's only through a quirk of rounding errors that we have seven days in a week rather than ten. 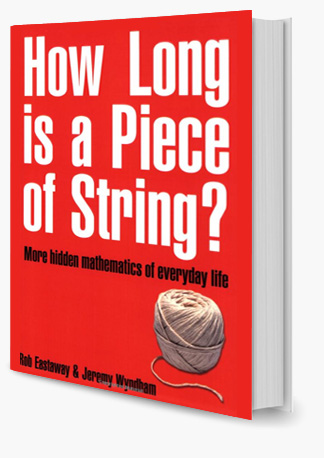