The Hidden Maths of Sport
By Rob Eastaway and John Haigh

This dip-in book talks about a host of ways - serious and light-hearted - in which maths touches sport, from the tactics of a tennis server to the best place to aim a dart if you are an average pub player. Most chapters feature sport puzzles and historical anecdotes. Altogether there are more than 40 sports referred to, not surprisingly the big sports - football, cricket, athletics, etc - get most of the coverage. This is as much a book for sports fans as it is for those who like maths.

Statistician and former Oxford football blue John Haigh knew I had an interest in maths and sport, and asked if I'd be interested in collaborating in a book with him.  The first edition was published as How To Take A Penalty in 2005 and then in paperback as Beating the Odds (2007).  When it came to updating, we finally adopted a title that accurately describes the content of the book. Sadly John Haigh died in April 2021 after a long illness, but at least he was able to see the new edition.  All proceeds from the book go to the charity www.googlyfund.co.uk 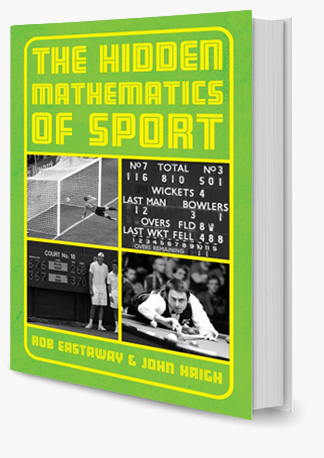