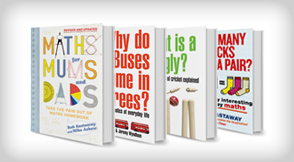 I've written or co-written eleven books, some of which have appeared in several languages. The majority are about the maths of everyday life, but I've also written books on cricket, memory and creative thinking. 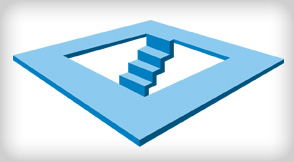 I am Director of Maths Inspiration, a national programme of interactive lecture shows in theatres that has reached over 100,000 teenagers in the last ten years. I'm closely involved with the UK maths community, from primary schools to universities. 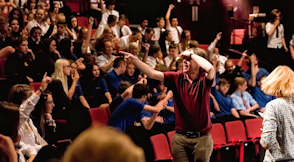 I give talks to adults, teenagers and children that range from small interactive workshops to keynote lectures in front of several hundred. I've also done lots of radio, including BBC Radio 4, 5Live, Radio 3 and 2, but not 1 or 6...yet. Here's a rather dry exam question:

"Two vertical poles are 8 metres apart. Draw the locus of points that are within 6 metres of the nearest pole."

Everyone knows what the penalty area looks like on a football pitch: it's a large rectangle (known as the 18 yard box). If anyone in the attacking team is fouled in the area, they are awarded a penalty which is taken from a spot that is 12 yards from the goal line.

But that's not the case. As with every other sport, the modern pitch markings evolved.

Football as we would vaguely recognise it began in the 1870s, but it wasn't until 1891 that the idea of a penalty was introduced.  A line was marked across the pitch, 12 yards from the goal line. Any foul or handball inside that area incurred a penalty, and the penalty kick could be taken from any point along the 12 yard line (though why a player wouldn't just take it from the middle point is unclear).

The groundsman had to paint a line to mark the zone where the goal kick was allowed to be taken. The goal was 8 yards wide, and the goal kick had to be taken from within 6 yards of the nearest post. It's exactly the same as the locus question at the start of this blog (but using yards instead of metres). Have a go at sketching it.

Yes they did. Take a look at the photo at the top of this blog, taken at the 1901 FA Cup final between Tottenham Hotspur and Sheffield United. You can clearly make out the line of the bulging six yard area. @CBarronie I think it's saying there are 1,350 births in UK on a typical (July 4th, whatever)

RT @Elsie2110: New blog post! Musings: Maths on the back of an envelope by Rob Eastaway A really interesting and 'easy' read from @robeastaâ¦

@PeterAHayes_pah Glad you enjoyed it ð

@HeatherMassey2 I imagined Cornwall like a zoomed in piece of toast, with all it's knobbles and bumps. (Actually Iâ¦ https://t.co/uOGf720B34