The Magazine Keys of Ypres 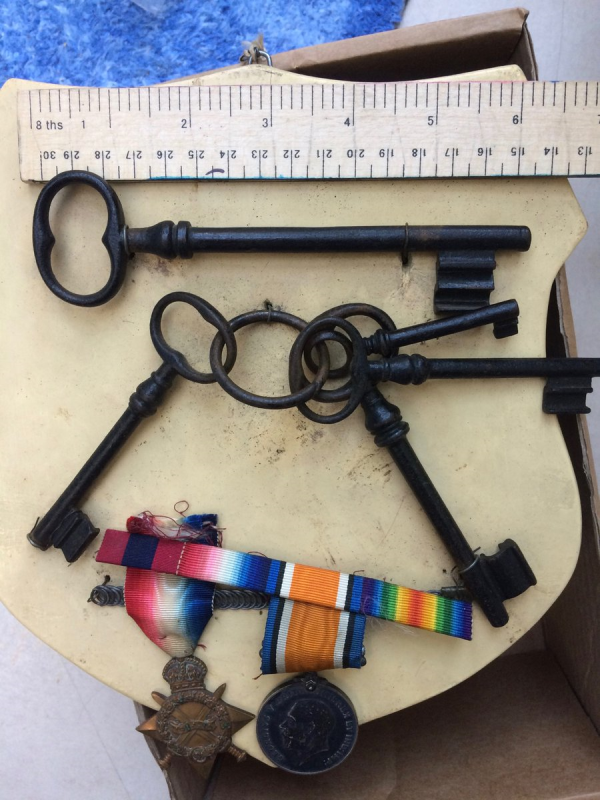 For several decades, these keys attached to a shield were stored in the back of a wardrobe at my parents' house.  Later, my brother looked after them. Now - with my eldest daughter studying WW1 in history - they have been passed on to us, along with the rest of my grandfather's WW1 memorabilia, which include his precious Distinguished Conduct Medal earned for cutting wires under machine-gun fire during a raid in July 1916.

The keys have always been a mystery to the family.  Scrawled on the back of the shield is:

The word 'Magazine' is being used to describe an ammunition store.  But what and where was this store, and why did my grandfather (a sergeant) have the keys?  We don't know.

I thought it was time to find out more, so I tweeted a request for more information.  I have had two responses so far.

The first suggestion, from @jackie_57_, is that the keys might belong to the Powder Magazine (known in Ypres as the Kruitmagazijn).  This impressive stone building was used as a gunpowder store in the 17th and 18th centuries, was rebuilt in 1817, and was probably used for storing ammunition in World War 1.  The historic building was restored in 1998.

The second suggestion, from Rex Cooper (@sandpilot), was that the keys might have been used in one of the cellars that were used as bunkers and for ammunition storage in Hooges, to the east of Ypres.  (Coincidentally, those 'rat-infested' cellars were also the base for a different sort of magazine - the popular trench newspaper 'Wipers Times' was produced there.)

All of this has added some poignancy and intrigue to my daughter's school trip to Ypres next week.  She'll be taking a photo of the keys, and with any luck the guides, or local museum, might be able to cast some light on this bit of WW1 memorabilia.