And Lo! A bright star shone in the south west.... 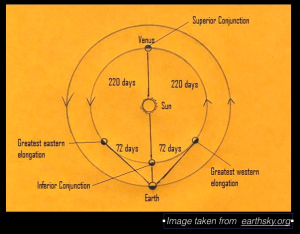 Until this month, the only thing I knew about Venus was that it's closer to the sun than we are.  I knew this because:

That's the order of the planets going out from the sun, starting with Mercury, Venus and Earth, and finishing with the is-it-or-isn't-it planet Pluto.

But now I know more about Venus.

One evening in early January my children looked out of the car window and asked: "What's that really bright star dad?"  Low in the sky was a star that was shining so brightly that I thought it must be either a landing plane or a satellite.  It turns out it was neither.  It was Venus.

We are going through a particularly bright phase of Venus at the moment.  Apparently this happens every couple of years, so why have I never noticed it before? It's probably because I haven't had excited children pointing it out before.  And also because most nights are cloudy.

For the last fortnight we've been noticing Venus every night, which has prompted me to learn more about it.  I already knew it was closer to the sun than us, but it had never occurred to me that this means when we look up to the night sky, Venus must always be roughly in the same direction as the sun. The sun sets in the west, so at dusk, Venus will be west-ish as well.  Depending on where it is in its orbit, half the time Venus will be to the "left" of the sun and will set after it, so we will see it in the early evening. The other half of the time it will rise before the sun and anyone up before dawn will see it then.  This is why Venus is sometimes called the evening (or morning) star.

But why is it so bright?

Its atmosphere happens to be extremely reflective, so most of the light that hits Venus bounces off. However its brightness will vary.  Like the moon, Venus goes through phases.  At times it will be a full bright disc (when it's the other side of the sun) and at other times it will be a crescent (when it's the same side of the sun as us).  Unlike the moon, the size of Venus changes in the night sky.  When it's closest to us, its diameter appears to be about five times bigger than when it's at its furthest.  That's why Venus tends to be brightest when it's close to us and is a crescent, which is how it is at the moment.  Only a sliver of the planet is reflecting the sun to us, but it's a big sliver.

Venus is currently waning, and by March it will be in front of the sun and invisible, but in late April it'll be ahead of the sun and very bright in the mornings.

So when my kids say Venus is brilliant, they're right.

P.S. What about Mars? At the moment in early evening it is just a little pink-ish dot up and left from Venus.  That's because Mars is currently the other side of the sun from us, so just a tiny disc.  Give it a year and it'll be much bigger, and might take over as the kids' favourite.