Why it pays to have a strong serve in tennis.

Wimbledon 2010 saw one of the most freakish sporting contests of all time.

In a match that spanned three days, John Isner (USA) finally broke the serve of his opponent Nicolas Mahut (France) to win the final set by 70 games to 68.  It smashed the previous Wimbledon fifth set record, which had been 23-21.

But how could this extraordinary result have come about?  What were the chances?

It turns out that the chances were a lot higher than you might expect.  It all happened because both players' serves were too strong.

Let's do the maths.

Suppose you have a super-power which means every time you serve it's an ace.  You always win every point you play.  Your chance of winning your service game is of course 100%.*

What if instead you have a feeble serve, always serving double faults? This time you win 0% of your service games. 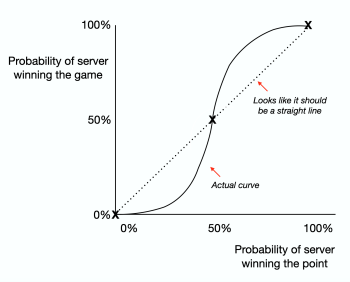 The calculations for this are quite messy, but perhaps you can see why the result is true by thinking about what happens when you play lots of points.  After one point your chance of being ahead of your opponent is 80%.  But imagine an extreme in which a game requires you to be the first to win 100 points.  On average, the non-server will only be on 25 points when the server gets to 100, and it would take an almost unimaginable sequence of luck for the non-server to over-turn that lead.

The problem for Isner and Mahut is that both were winning too high a proportion of their service points, and even an 80% success rate on each point meant that they were each almost certain to win every one of their service games.

In 2019 Wimbledon finally solved the long match problem by introducing a tie break in the fifth set. That set could now only go to 13-12 (as indeed it did in 2019 when Djokovic beat Federer).  In 2022 the authorities curtailed the fifth set even further, introducing a sudden death ten point tie break if the score reaches 6-6.

Meanwhile, your own tennis game might benefit here. A small improvement in your average tennis serve point success from (say) 50% to 55% will convert to a much higer chance of you winning your service game. It's advice that I'll be taking on board this summer.

* A reminder of the scoring: you need to win a minimum of four points to win a game, the first three of which for historic reasons are scored 15, 30 and 40.

THIS BLOG POST IS ADAPTED FROM THE TENNIS CHAPTER IN THE HIDDEN MATHS OF SPORT, WHICH I WROTE WITH JOHN HAIGH.