The Upside Down Swimming Calculation

How two wrongs made a right. 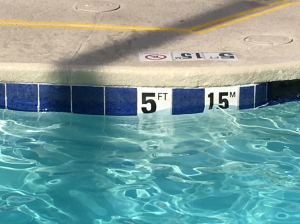 A few months ago I was sitting by a swimming pool in Las Vegas (as you do), reading a book, when a man and his young teenage son entered the water.

As the photo shows, at the edge of the pool there was a sign indicating the depth of the water, in imperial units (for the Americans) and metric (for the tourists).  The dad spotted it and saw a chance for a bit of math(s) coaching.

And the son was right - there are indeed roughly three feet in a metre (a metre is actually 3ft 3in).  Yet both he and his dad had made a mistake.

In the USA, there's very little use of metric units, but even so it's a bit alarming that the dad was clearly unfamiliar with how huge 15 metres is, it's not 5 feet, it's more like 50 feet!  Meanwhile the son divided 15 by 5 instead of the correct, but harder, 5 divided by 15.

* A few minutes later, the dad looked at the sign again and spotted that it said 1.5m not 15m.  There was much confusion, and as far as I know they never got to the bottom of the problem.