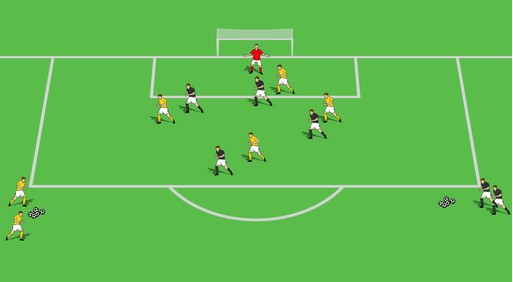 Here's a rather dry question that you might encounter in a maths exam:

"Two vertical poles are 8 metres apart.  Draw the locus of points that are within 6 metres of the nearest pole."

Everyone knows what the penalty area looks like on a football pitch:  it's a large rectangle (known as the 18 yard box).  If anyone in the attacking team is fouled in the area, they are awarded a penalty which is taken from a spot that is 12 yards from the goal line.

But that's not the case.  As with every other sport, the modern pitch markings evolved.

Football as we would vaguely recognise it began in the 1870s, but it wasn't until 1891 that the idea of a penalty was introduced.  A line was marked across the pitch, 12 yards from the goal line.  Any foul or handball inside that area incurred a penalty, and the penalty kick could be taken from any point along the 12 yard line (though why a player wouldn't just take it from the middle point is unclear).

The groundsman had to paint a line to mark the zone where the goal kick was allowed to be taken.  The goal was 8 yards wide, and the goal kick had to be taken from within 6 yards of the nearest post.  It's exactly the same as the locus question at the start of this blog (but using yards instead of metres). Have a go at sketching it.

Yes they did.  Take a look at the photo below, taken at the 1901 FA Cup final between Tottenham Hotspur and Sheffield United. You can clearly make out the line of the bulging six yard area.