The Mystery of Phantom Puzzle No.137

I thought I was going mad.

In February this year I bumped into my colleague Katie Steckles.  A couple of weeks earlier, I had noticed one of her puzzles had been used as the BBC Radio 4 Today programme's 'Puzzle of the Day'.

"I see you've become one of the Today puzzle setters," I said.

"I have no idea what you are talking about," said a bemused-looking Katie.  "I've never submitted any puzzles to the BBC, and I certainly didn't invent that one."

I did a search through the index of Today puzzles published on their website during the previous month, .  There was no sign of Katie's puzzle.  A Google search also produced nothing.

I was baffled.  We joked about it, but as the evening wore on I slowly came to the only sensible conclusion, which was that I had imagined the whole thing.  In fact, I must have dreamed it.  And unlike any dream I have had before, I had created something in my sleep that still made sense when I woke up.  Though Katie and I did agree that as a puzzle it was a little dull.

"I'm not sure what to make of the fact that you are having dreams about me writing dull puzzles," said Katie, sounding just a little bit hurt.

For several months, I continued to have this uneasy feeling that my imagination and reality are now becoming blurred.

Then last week I got a surprise.  I was on Twitter, browsing through listeners' comments about past Today programme puzzles.  Scrolling down the list, I came across a Tweet from an annoyed listener, dated January 10th 2018.

He had tweeted: "My puzzle for today is: Why wasn't THIS one read out?".  He had done a screen grab of the puzzle that had been published on the BBC website at 7am that morning.

And there it was, Puzzle Number 137 set (supposedly) by Katie Steckles, just as I had remembered it: 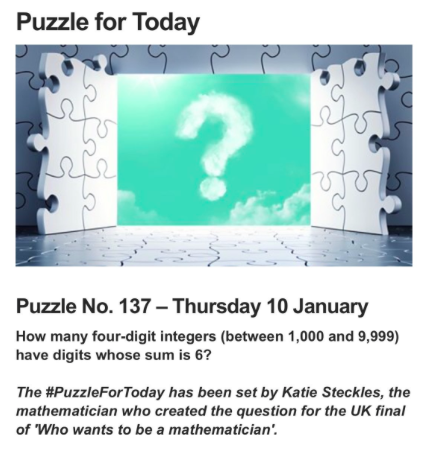 You can search for Puzzle 137 online, but you won't find Katie's.  Instead you will find a puzzle called Back in 2011, set by Bobby Seagull.  That's the puzzle which was actually broadcast on January 10th 2018.  Of the phantom Katie Steckles puzzle* that was briefly put up on Today's website, there is no sign, its disappearance as mysterious as its arrival.

There is one other mystery.  According to the screen grab image above, the puzzle was published on "Thursday 10th January".  But this year, 10th January was a Wednesday.  Maybe this puzzle has disappeared into a time warp.

All I can say is thank goodness for the guy who did the screen grab, or I'd be fearing for my sanity.

* further investigation suggests that this question was probably part of a set that Katie compiled from other sources for a UK maths competition.  Somebody submitted the question to the Today programme, and put her name on the puzzle because her name was at the top of the compilation.