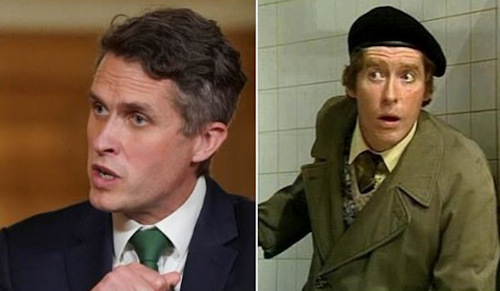 The farcical knighthood of Gavin Williamson last week reminded me of his doppelganger Frank Spencer, the central figure in the 1970s sitcom Some Mothers Do 'Ave 'Em.

And that led me to a remarkable discovery.

First, a quiz question: What is the morse code for S.O.S.?

Here's a reminder of the famous theme tune of Some Mothers Do 'Ave 'Em, written by Ronnie Hazlehurst.

It was only last week that I discovered where that theme tune came from.  Hazlehurst had a reputation for slipping musical jokes into his music. Seeking inspiration for a theme for Some Mothers, he turned to Morse Code.

Let's convert the word SOME into Morse.  We already know S is dot dot dot and O is dash dash dash.  The whole word is:

Now tap it out with your finger.  With a bit of imagination, you'll find yourself tapping the rhythm to the opening bar of Some Mothers Do 'Ave 'Em.

The rhythm of the whole theme goes as follows:

Years later, the composer Barrington Pheloung used the same idea to create the theme tune to the detective drama Morse.  The word MORSE contains all the letters of SOME, so the same beats appear in the opening bars of the two themes, though not in the same order of course.

Andrew Jeffrey and I discussed this, and a lot more about Morse Code, in Episode 5 of the second series of our Puzzling Maths podcast.  https://puzzlingmaths1.podbean.com/e/season-2-episode-5