Government rhetoric is not matched by reality

This Spring, my son was choosing his sixth form subjects.  He did well in GCSE maths, but he felt A Level would be too full on and abstract. He wanted to do something that was more related to everyday applications and statistics “like the stuff they do on More or Less” (the BBC podcast).

There is a perfect sixth form course for this, it's called Core Maths.  It's the course that most employers (when they hear it described) say they'd love school leavers to have studied.  But it wasn't available at his school. Nor in neighbouring schools.  In fact, not a single school in Southwark (or indeed most of South London) was offering the course. **

In 2013, education minister Liz Truss decried the low levels of students leaving school with a maths qualification. In a speech to the Institute of Education she declared: “Maths is essential for handling your finances, making life decisions and progressing to a wide variety of careers”.

The figures were clear and shocking - in post-16 education, the UK is an outlier. In most of the world's leading economies well over half of post-16 students do maths of some kind. In the UK, it's only 20% (if that). 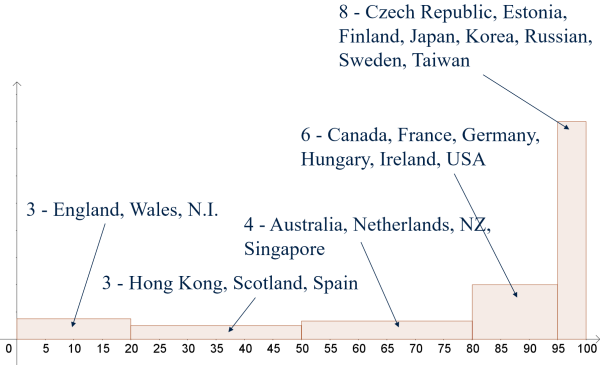 The histogram comes from this 2014 report. It's a bit misleading to lump in Hong Kong with Scotland, but both were in the 20-50% range. https://www.nuffieldfoundation.org/wp-content/uploads/2014/03/Mathematics_after_16_v_FINAL.pdf

Liz Truss and colleagues had a solution. A course called Core Maths (really, it's the maths of More or Less - estimation, statistics, risk, interpretation of data. Vital stuff that you need if you want to be a high functioning adult, whatever your career).

In 2014, Truss reiterated her message: “We're introducing Core Maths, so that the majority of young people will be studying maths right up to 18 - just like those high-performing countries.”

Core Maths was launched properly in 2015. Here's what has happened to post-16 maths since then:

* A Level, AS Level and/or Core Maths

The vagueness in the 2015 numbers is frustrating,  I've spoken to several experts who have different views on what the actual number was, but whether the numbers are up or (more likely) down, the main point is that in seven years, the needle has barely shifted. We are still way behind other countries.

Why might the numbers have fallen?  It's mainly due to a massive drop in the numbers taking AS Level maths.  In 2015 there were 160,000 ish AS maths awards (it is unclear how many different individuals this represents); by 2018 it was down to 81,000.  This year just 15,000 took AS Level.  This was mainly due to the revamping of A Levels and the way they were funded (under Michael Gove's watch).

Meanwhile A Level and Core Maths have grown (thanks in part to the fantastic efforts of the Advanced Maths Support Programme) but not enough to make up the difference. Only 12,000 took Core Maths last year, out of over 200,000 that the govt supposedly wants to take it: 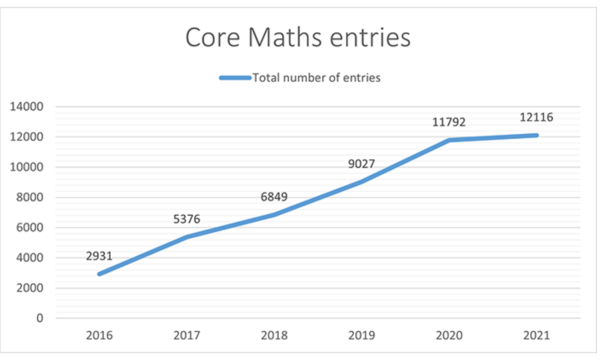 And why such slow growth in Core Maths? As I've been discovering, there are a few reasons, but the main one is a lack of resources. There just aren't enough teachers, and schools don't have the budgets.  And when it comes to UCAS points, Core Maths isn't quite as valuable as an ‘EPQ' (Extended Project Qualification).

For all the political rhetoric, the fact remains that British school leavers are lagging behind the rest of the world, and it's possible that the gap has widened.

** An online version of Core Maths is now being offered with remote tutors, taking away the need for schools to provide their own teachers.  My son is part of a small cohort from his school doing this pilot course.  It's not nearly as effective as in-person teaching, but it's a start.