How to find a cricket pitch in a football pitch 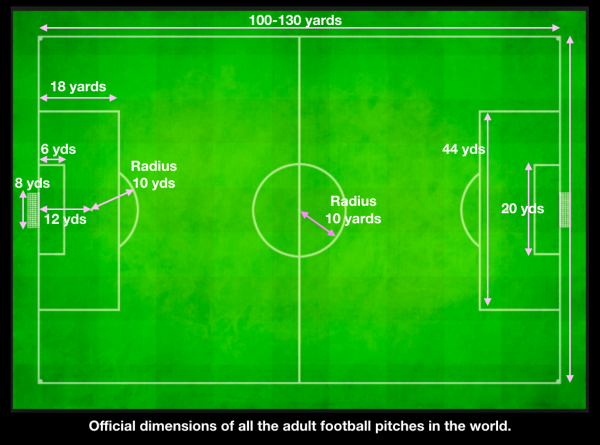 Did you know that the official radius of the centre circle of a football pitch is 9.15 metres?  Probably not. I certainly didn't. It's an unmemorable number, and it's fair to ask: which idiotic bureaucrat decided to come up with such an inconvenient measurement for this standard football feature?

The answer is that nobody sat down and said "Hey, 9.15 metres, that'll be a good number".

The creators of the official Laws of Football didn't use metric units, they used Imperial. All the standard dimensions of a football pitch were originally specified in round numbers of yards and feet.  The radius of the centre circle is 10 yards (30 feet), and that is the standard that has been adopted worldwide - though of course most countries measure in metric units, and hence have converted 10 yards to 9.15 metres.

The other measurements on a football pitch are also nice round numbers, though why these particular numbers were chosen is not clear.  Maybe they just 'felt right' to the Edwardians who sat around a table in 1902 and decided on them.

* The distance between the goal posts is 8 yards (24 feet)

* The distance from the goal line to the penalty spot is 12 yards, exactly midway between the edge of the 'six yard' box and the straight edge of the penalty area, which is also known as the '18 yard box'.

* The radius of the curved arc around the corner flag is one yard.

* The width of the penalty area is a more obscure figure: 44 yards.

How did they come up with 44 yards?  It turns out to be the width of the goal plus twice the depth of the penalty area:

This happens to be exactly double the length of a cricket pitch (22 yards), and 22 yards is a historic Tudor measurement known as a chain.  The chain was a standard measurement of land (one acre is 10 square chains) and as recently as the 1950s many farmers, surveyors and groundsmen would keep a physical chain of this length to do their measurements.

So while it might be a coincidence that the width of the penalty area is 44 yards, the fact that it's exactly two chains long would have been convenient for groundsmen, so it would have been a popular number.

There was one further pitch marking that was added in 1937: the D that goes on the edge of the penalty area.  The D is an arc of a circle of radius 10 yards, centred on the penalty spot.  The idea behind it is to ensure that the players are all at least ten yards away from the penalty-taker.

The penalty spot was already established as being 12 yards from the goal line, and the 10-yard D was just a copy of the centre circle.  But what it means is that the distance from the goal line to the tip of the D is 10 + 12 = 22 yards.

So if you ever want to play cricket on a football pitch, place one set of stumps on the tip of the D and the other set at the centre of the goal line, and your pitch will be exactly the right length.

Mind you, you might also need a very heavy roller.