The hidden maths of the coxcomb chart

Last week was the 200th anniversary of the birth of Florence Nightingale. She was of course best known for her work as a nurse during the Crimean War, but she was also admired for her pioneering use of statistics to fight disease.

The diagram that she's most famous for is known as a 'coxcomb', so-called because its jagged appearance is a bit like the comb-like crest on a cockerel's head.

The coxcomb example below left shows the number of deaths in the Crimea and their cause, from April 1854 to March 1855.  What stands out is the huge surge in deaths over the winter, from December to February.  Even more significant is the fact that the orange area that represents deaths from wounds is dwarfed by the grey area representing death from disease. 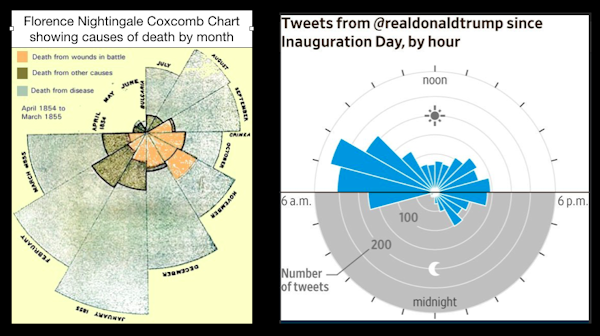 Talking of orange...in 2018,the New York Times borrowed the coxcomb idea to produce the chart above right.  It shows how often Donald Trump tweeted at different times of the day during the first year of his Presidency.  The standout message is that Trump goes into Twitter over-drive soon after he wakes up (when his minders are asleep?), and hardly tweets at all during the middle of the day.

But the New York Times diagram is misleading.  Between 7am and 8am, Trump tweeted four times as often as he did at noon.  However, the area of the 7am segment is sixteen times bigger than the noon segment, giving us an exaggerated impression of the magnitude of Trump's early morning Twitter storm.

What about Florence Nightingale - are her diagrams just as misleading? No!  The genius of Nightingale's coxcomb diagram is that the radial scales were not linear.  Instead, she used a square root scale, so that a wedge that's twice as far from the centre represents a number that's four times as big.  This means that the areas on the chart are in proportion to the numbers that they represent.

And that is one reason why Florence Nightingale deserved her place as a Fellow of the Royal Statistical Society.