A simple yet compelling game

Every so often a new mathematical game or puzzle is invented that is so simple that it seems incredible that nobody thought of it before. Think of Sudoku, which took the world by storm in the 1990s, or the matching game Dobble which became an international hit around 2010.

I wonder if the next blockbuster will be Catch-Up.  This simple adding game was invented by a group of academics at New York University* in 2015, but has yet to catch on. The game can be played with stacks of Lego bricks of different heights, the aim being to end with a taller tower than your opponent. For example the 6-game is played with Lego stacks of height 1, 2, 3, 4, 5 and 6.

To start the game, Player A takes a single stack of any height to start their tower.  Player B then takes stacks one at a time, building them up until their tower is the same height or taller than Player A’s, which ends their turn.  Player A now does the same, stacking until their tower is at least as tall as Player B’s.  The players keep taking turns until all of the stacks of bricks have been used up.

Here's an example for a game of six stacks (the N=6 game). 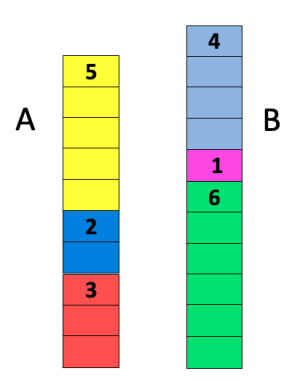 A went first with the 3 stack.