How Guilty Should You Feel? 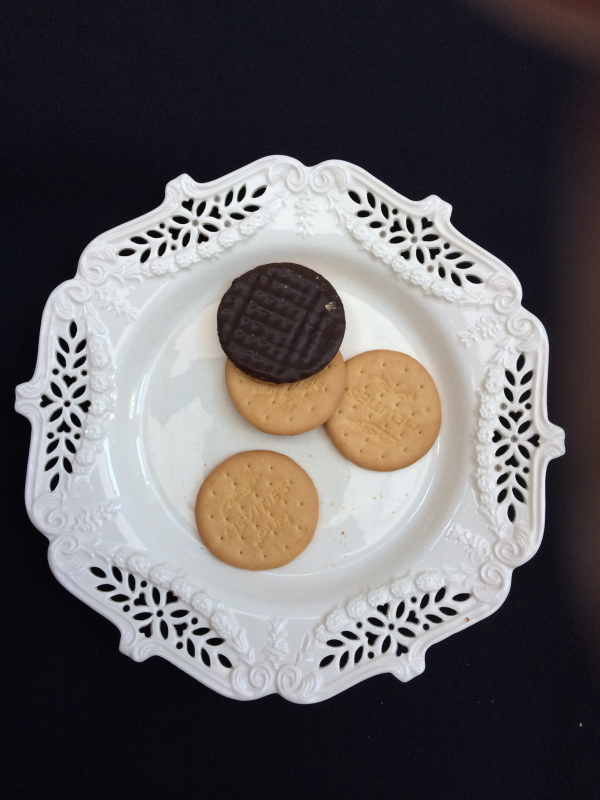 The vicar’s wife has invited you and four others for morning coffee*. She brings in a plate with biscuits on it, four of which are chocolate.

The plate is offered to the first guest, who takes a chocolate biscuit. The same with the second and third.  Now it’s your turn.  You love chocolate biscuits, but there’s only one left on the plate. If you take it, you know that you are depriving the fifth guest of the chance of having a chocolate biscuit.  And, being the polite and guilt-ridden person you are, you of course take a plain biscuit instead.

The question is: should the three guests who took a chocolate biscuit before you also have felt guilty, and if so, how do you allocate the amount of guilt that each guest should feel?  Was the third guest more guilty than the first?

I first posed this question in a letter to New Scientist magazine in 1995.  I’ve thought about the problem many times since, because (not) taking the last biscuit is a such a common social situation.

So how should we assign the guilt?  We should create a mathematical model, of course.

Let’s start with the vicar’s wife.  She holds coffee mornings all the time, so I’m going to assume she’s a good judge of the relative popularity of chocolate biscuits versus others.  There are four chocolate biscuits and five guests, so she reckons that the chance that somebody will choose a choccie bic is 4/5, or 80%**.

The probability that all the other guests who haven’t had a biscuit yet are going to want a chocolate one.

My New Scientist letter generated several responses. My favourite was this one:

The answer to the problem posed by Rob Eastaway (letters, 15 July) is easy to set down but hard to put into practice.One should always act as though everyone else in the same situation will act similarly and morally.

The problem at the vicar’s tea party therefore only applies to the first person offered a biscuit because in taking a chocolate one she must assume the others will do likewise and the fifth guest will lose out.

Eastaway, in writing what appears to be a light-hearted tailpiece has in fact posed a problem of very considerable importance in the conduct of social and international relations.

Wow. Can this mean that many of the world's problems - such as the competition for limited resources like oil, clean air and indexed-linked pensions - come down to the chocolate biscuits at the vicar's wife's tea party?

* Apologies to my friend Rachel Parkinson for this lazy stereotype. As she points out, these day's it's just as likely to be the vicar's husband.  And as for coffee mornings...they are so 1995.

** We'll use this number, though the vicar's wife has failed to allow for any variance which makes her partly guilty, too.